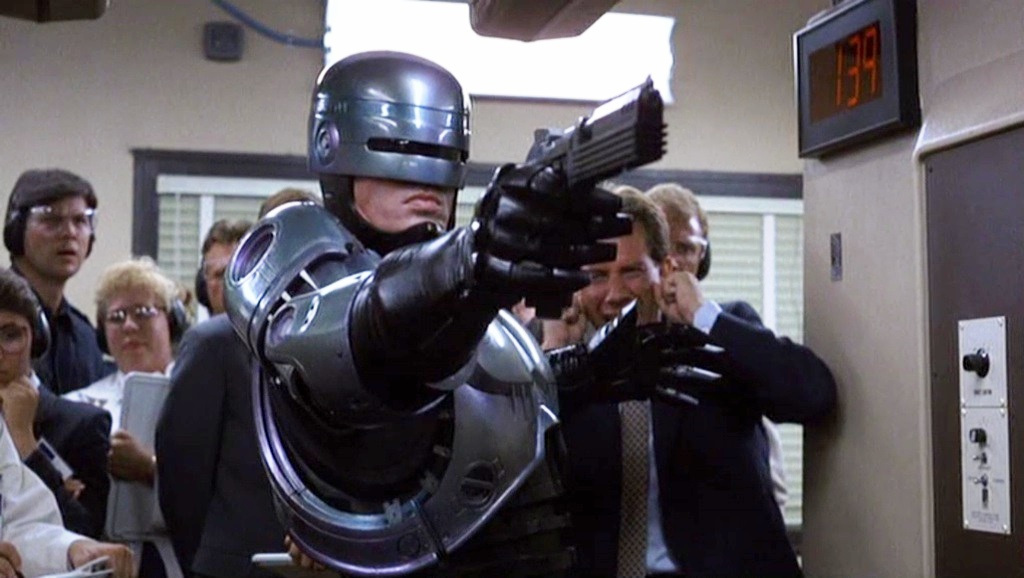 And so soon! Yes, even I doubted that this series would continue past one (1) installment. But the Criterion Essays have returned with a shiny, new sequel, this time covering a movie I hope will be more accessible than a Swedish art film about death. We’re watching “RoboCop,” creep!

Yes, “RoboCop” is part of the Criterion Collection. In fact, it was one of their very first releases (Spine #23). But don’t act so surprised! To use one of my favorite collegiate turns of phrase, “In this essay, I will argue that ‘RoboCop’ is a masterpiece of satire that is far more intellectual than its reputation may suggest.” At least it’s not “Armageddon,” Spine #40.

Besides, now seems as good a time as ever to revisit “RoboCop”: the character sent Twitter into a frenzy just a week or so ago when it was revealed he was a playable character in the expansion of “Mortal Kombat 11.” And a few weeks before that, another Paul Verhoeven movie, “Starship Troopers,” skyrocketed to the front page of Reddit after nearly 30,000 users upvoted a post that unironically misunderstood the film’s lampoon of the military (“Violence, explosions, naked chicks… what more could one ask for?!”).

Yes, “RoboCop” is as relevant as ever and this week in quarantine, I was looking for something sillier. My essay on “The Seventh Seal” definitely captured ~the mood~ when I wrote it, but since then I’ve decided to look on the bright side of life. I assure you that decision has nothing to do with the fact that I landed a remote internship for the summer… but, as a great man once said, “Everything’s comin’ up Milhouse!”

“RoboCop” was released in 1987, a time when hair looked like this, computers looked like this and an ultraviolent parody of American corporate greed was mass-marketed to children by the same corporate interests that the film ridiculed. There are certainly films more ‘80s than “RoboCop,” but few of them respond to the ‘80s like “RoboCop.” And not just culturally: produced and released during Reagan’s second term, the film is replete with references to the politics, economics and anxieties of the era. None of these are subtle; Paul Verhoeven doesn’t speak in subtleties. But from a Gen Z perspective — entitled, self-obsessed, my brain sucked dry by my iThing — to learn that there’s more to “RoboCop” than just, well, “RoboCop” came as a surprise.

My first exposure to the series was the 2014 remake, which was certainly a version of the character. A tone-deaf corporate cash grab stripped of its satire, José Padilha’s “RoboCop” was a sullen, self-serious, “dark and gritty reboot” — but not too dark and gritty, it had to be to PG-13! The film was a dud with critics and a bomb at the box office, killing the previously announced “RoboCop 2” and sending the series back to the vault of intellectual properties past, where a few years from now, some hot-shot Sony schmuck will inevitably dig it back up and go, “Hey, what about ‘RoboCop?’” (EDIT: Say it and it shall be done!)

So that was my impression of the franchise, and past the Paul Verhoeven original my conception of the brand as little more than an elaborate advertisement for action figures wasn’t too far off. But in 1987, “RoboCop” was… self-aware? Gasp! Chalk that up to Verhoeven: the prominent Dutch provocateur is the king of having your cake and eating it too, and in “RoboCop” he both skewers corporate apathy and relishes pulpy violence. And it works! Verhoeven would make a career of it, too: 1990’s “Total Recall” is a similarly over-the-top satire of colonialism; the aforementioned “Starship Troopers” parodied the military-industrial complex; and “Showgirls” is either the dumbest movie you’ve ever seen or the dumbest-on-purpose movie you’ve ever seen, depending on your vantage point. Throw in “Basic Instinct” and 2016’s “Elle” and you’ve got yourself a legacy of pushing people’s buttons, a cinematic catalog of tightrope walks in taste.

But “RoboCop” started it all, and “RoboCop” started it right. The film, of course, follows Detroit police officer Alex Murphy (Peter Weller), who is killed in the line of duty and resurrected as a cyborg public servant, complete with a steel suit of armor and copious Christian symbolism. Set in the not-so-distant future, the Detroit of “RoboCop” is a crime-ridden hellhole, so overwhelmed by violence that Detroit PD must turn to the infallible, stalwart private sector to clean up the streets. The deal they broker with Omni Consumer Products (OCP) feels a little one-sided; in exchange for taking over the police, the megacorporation is given free rein to tear down impoverished sectors of the city and transform them into opulent utopias, a crystal clear reference to gentrification that hits even harder today.

The film is punctuated throughout by fake news segments called Media Break: “You give us three minutes, and we’ll give you the world.” Some of their stories speak to global turbulence: the threat of nuclear power in South Africa, U.S. involvement in a Mexican civil war, etc. But others are just plain hilarious. For example: a failed Presidential press conference from the “Star Wars Orbiting Peace Platform,” in which anti-gravity malfunctions and the entire White House staff is sent helplessly floating through space (Here’s another: a U.S. space laser malfunctions and instantly disintegrates Santa Barbara).

Punctuating the news, in turn, are various fake advertisements, all of which are laden with humorous commentary of their own. In a jab at American health care, we’re shown a commercial for the Family Heart Center, which offers the brand-new Series 7 Sports Heart by Jensen (“Yamaha: You pick the heart!”). My favorite is for Nukem, a Battleship-style board game that taps into the paranoia of the late Cold War; at one point, a father playing with his son yells, “That’s it, buster, no more military aid!”

And that’s just what’s on TV! In the story itself, there’s no funnier gag than ED-209, a giant, chicken-legged, peacekeeping machine designed by OCP before RoboCop. Championed by the Senior Vice President/villain of the film (Ronny Cox, whose character’s name is literally “Dick Jones”), ED-209’s grand intro to the board is ruined when he massacres an executive. Later in the film, in what is staged like a climactic end fight, RoboCop easily defeats ED-209 when he… goes down a flight of stairs, and ED-209 — never programmed to handle a change in elevation — falls off the edge and squirms at the bottom like a bug flipped onto its back.

Not even RoboCop himself is spared from satire, and rightfully so: just look at his name! When a woman thanks him for saving her life, he replies in monotone, “Madam, you have suffered an emotional shock. I will notify a rape crisis center.” Smash cut to his cop car, his triumphant theme song blaring. But in spite of all these sendups, “RoboCop” features a compelling emotional throughline for the character, as old memories resurface and Murphy must search for what OCP erased.

His former partner is veteran officer Anne Lewis (Nancy Allen), a cool, competent heroine in an action movie era with some tough competition (Ellen Ripley and Sarah Connor, to name just two). Although all but his chin is covered in metal, Anne recognizes Murphy right away, and she serves a critical role not only in his psychological reawakening but in the final action sequence.

For all its retro ’80s goodness, “RoboCop” is surprisingly forward-thinking, and I think that’s why the film is now a staple of the decade and the genre at large. As we stare into the abyss of the worst economic crisis since the Great Depression, perhaps it takes a film ripped from Reaganomics to remind us that the folks up in corporate don’t always know what’s right. At the very least, they really ought to take themselves less seriously. 10/10

3 thoughts on “The Ridicule of ‘RoboCop’”